I could hear the tune in my head, but I could not remember the name of the song or the lyrics. In fact, all that I could remember was it was a beautiful song sung in Japanese and it drove me crazy until just a few minutes ago, after I had Googled it.

Anyway, the reason that Tony and I met our friends at the Dietert Center was because Eileen and Kris were going to do a line—dancing class with me. None of us had ever line—danced before and we thought it would be fun to give it a whirl, so to speak. Plus it would be good exercise for us.

Jim and Tony came along to support us, even though they refused to participate in the class and it was fine with us, because they both had good reasons why they could not line—dance with us. Here is a brief description of Jeanette's line—dancing class, I found in the Dietert Club Ed fall catalog. 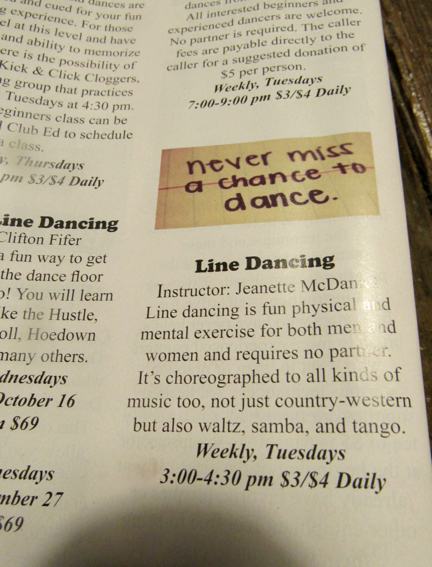 Tony and I were almost late (2:59) when we arrived at the Dietert Center. Kris & Jim and Eileen met us at the front door and we made it to the classroom at 3:00 sharp!

Jeanette, the friendly instructor, greeted us and talked to us girls as we signed up for her class and then about 20 or so women of all ages greeted us, too. And because Jeanette and her class were so friendly to us I knew that it was going to be a lot of fun. And I was right.

We line—danced for an entire hour. And I was the worse dancer in the entire class and I often caught myself going in the wrong directions or was kicking with the wrong foot, etc. to some really great music.

The hour flew by so fast, because I was having so much fun, so I wasn't all that self conscious about making so many mistakes, because I just chalked it up to being old.

But my "being old" excuse didn't hold water for long, because when one of Jeanette's students asked her about her upcoming birthday—Jeanette proudly said, "This birthday is a really big one, because I will be 85."

And when I heard her say that my jaw dropped to the floor and I almost tripped on it, because Jeanette could easily pass for being 60 years old. So I want to highly recommend enrolling in Jeanette's class to everyone, because I plan to make her super fun, Tuesday line—dancing class a weekly thing that I must do.

On the way home from my first line—dancing class that Japanese song kept popping up in my head, so as soon as we put the groceries up, I Googled it and I also found it on YouTube!

The name of the the Japanese song is Sukiyaki (Ue o Muite Arukou) and it was sung by Kyu Sakamoto and in the U.S. it reached the top of the Billboard Hot 100 charts, in 1963.

And this is an excerpt from Wikipedia about the song Sukiyaki:

"An instrumental version of the song was played by NASA over the radio for the Gemini VII astronauts as mood music, thereby becoming one of the first pieces of music sent to humans in space...."

That sounds like so much fun and a great workout, Nance!

Hi Unknown! It was so much fun and a great workout at the same time. And I cannot wait to go to the next class. Thank you for your comment.

How fun! I haven't done this in years. Must look into this for my area. Good, fun, and exercises different muscles and moves. Thank you for the reminder. And I'll be checking back. Have a great Tuesday.

Hi Anon! I love line—dancing and I hope you find a class in your area.