Today has been great and this past week has simply flown by. It is hard for me to know where to start telling all of the things that have been going on, so I will just highlight the main events.

As y'all already know Tony and I put in a ceiling in the bedroom and it was a ton of work, especially for Tony, because he had to nail up one board after another and  then shoved the pink insulation between each rafter.

Anyway, because we were so thrilled how much our/his work helped cool the house we decided to go ahead and do the rest of The Cabin—the kitchen and the big room.

Long story short the other day when our dear friend Danny was here, Tony told him about our upcoming ceiling project. Danny offered to install the new ceiling and it turns out that Tony and him worked out a trade, so the only thing that would cost us was the materials.

So this past Saturday Tony and I took the day off from working next door and we worked here—helping (gopher-ing for) Danny and Ernest, his electrician helper. And just so you'll know, before we started The Cabin's front porch looked like Medina's version of Home Depot and the inside of The Cabin looked like a tornado had hit it. 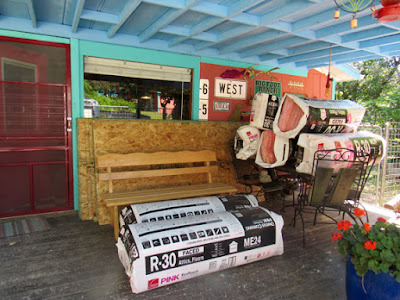 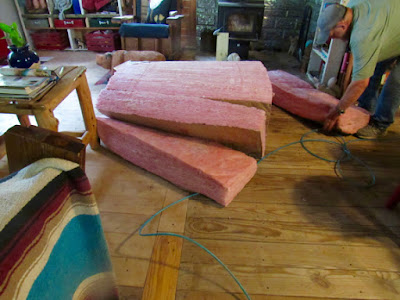 With the four of us excited about putting in the ceiling by end of day things went south fast, because all 22 rafters were hanging at various heights from the roof and we also needed more electrical work than anticipated. So to say the least I tried to be optimistic about it all, but it was hard trying not to frown even though Danny had figured out a solution.

In no time flat Danny and Ernest started running string lines from the kitchen to the front door, underneath the rafters, etc. so they they could accurately measure and make each rafter the same height from the roof

It took several hours for them to "rip" 22 strips from 2 x4s. And basically one end of the strip would be as tall as 3 inches and would go from 3" down to a thin sliver. And the pictures below shows some of the strips in place. (They are the white looking strips nailed to the bottom of the rafters.) 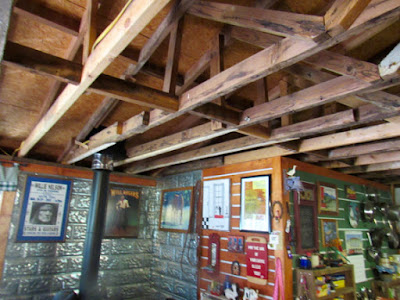 And while Danny and Ernest were fixing things Tony pulled me aside and suggested that I go work on my writing cabin, because I was talking to much to Danny, when he was trying to think.

My feelings weren't hurt, because I knew Tony was right, so I hauled several boards to my writing cabin while Tony was setting up the chop saw and connecting the nail guns to the air compressor, so I could work inside the cabin. And in no time at all I was chopping wood, nailing boards, etc. while listening to my music.

Around 6:00, the four of us called it a day, because we were all tired and exhausted from the heat. And even though only six sheets of 4 x 8 OSB were hung up and the insulation installed we all felt good, because all of the building issues and electrical issues had been solved and fixed. And the only thing that left for us to do was put up the OSB sheets and insert the insulation. And this is how we left things, until Danny and Ernest come back this Saturday to finish putting up the ceiling. Then we will be done with expensive electric bills and be cool and comfortable. 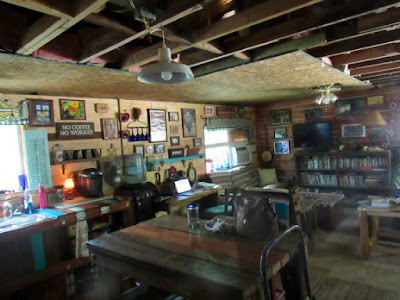 And to my disbelief I honestly do love the new OSB ceiling, even though Danny had suggested that we paint it. But I've decided not to paint it, because it looks rustic just the way it is. So all is great.

This afternoon Tony and I went to Kerrville to run a few errands and I purchased a new rain gauge, at Home Depot, because when we had that freak hail storm it broke pieces out of the top yellow funnel—giving us inaccurate rain counts.

And here is our new magnified rain gauge that we purchased for less than $4.00!. 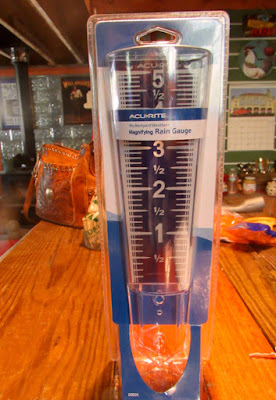 And that is about it for today, because Tony and I are going to go visit with Kent & Ruthie (Ruth Buzzi) and Sarah next door, at Escondida Resort. And then I plan to write the rest of the evening.

Y'all have a great evening and keep on laughing!
Posted by cousin nancy at 4:10 PM