First off, I would like to thank all of y'all for your kind, sweet, funny birthday wishes, phone calls and cards, because I had a pretty weird birthday. It is a long story, but I will try to condense it, so you don't fall to sleep reading this post (book). Here is what happened and please note that my birthday was last Thursday.

On Tuesday:
I was more or less out of sorts and I was trying to make some important decisions about what I should do. So, I decided to smudge The Cabin and myself, but I was out of sage and white grass, so I went to Cross Cultures, in Kerrville, and bought some more.

When I returned home, before smudging The Cabin I said a short prayer asking my angels, guides, family and friends on the other side to help me. And then I asked the Universe to give me a sign.

With all of the doors and windows opened, so negative spirits, forces, etc. could leave I was walking around the house trying to smudge it when Tony returned from work. After I told him what I was doing he smiled, gave me one of those looks and then he went into his man-cave to watch TV.

On Wednesday:
I was still feeling out of sorts, so I worked on my writing cabin. I built a drainboard for my small bar sink that Tony was going to do the plumbing on. Here's a picture of the small space, between the wall and my desk, before I built the drainboard. 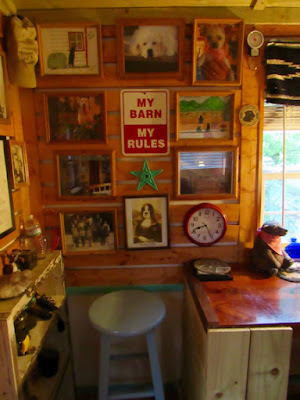 Later that afternoon, I received my first sign—in the mail. A dear friend of mine, unbeknownst to her that I was feeling out of sorts, sent me this as a funny birthday present and it made me laugh out loud. Here is a picture of my sign before I framed it, along with my already used/partially burned sage stick. 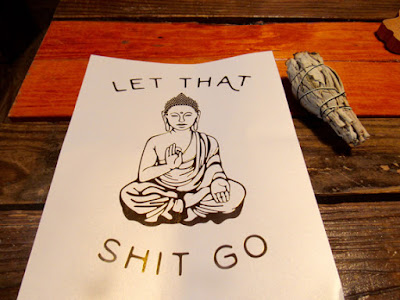 On Thursday (My Birthday):
That morning I worked next door and I had several revelations while I was working alone. So when I came home I was in high spirits, because I had figured out what I should do about three different situations. But I was still wishing to get a sign, to let me know that I was on the right track, so I smudged the house again.

Following a fun birthday lunch with Tony, in Kerrville, we came back home, so we could work on the plumbing for the bar sink. Basically, while Tony did the plumbing I stayed outside spray painting some boards to use for my sink's counter top.

Around 9:00 that evening I was relaxed, watching Ballykissangel, a fabulous series on BritBox, on Amazon. I was sitting in my chair with my feet propped up on the coffee table and Henry Standing Bear was curled up, sleeping in the other big chair.

All was good until the loud crash behind me. I was so startled my heart skipped a beat and Henry jumped up and started running around the house barking non-stop! Then Tony raced into the kitchen and asked, "Are you okay? What the hell was that?"

"I don't know!" Then I looked at my desk and saw that a big picture had fallen off of the wall above my desk and had landed face down on top of my laptop and my cobalt blue candy dish's lid had slid off of the dish. "How did this happen? I was watching TV, Henry was sleeping and out of nowhere this picture falls off of the wall!" Here is a picture I took of the wall after we had removed the picture frame. 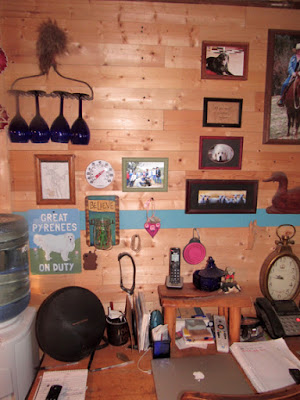 After we had checked to see that my computer was fine and the dish's lid or the glass in the frame was not broken—it hit me. "It's a sign, Tony! I am on the right track! I had asked for a sign and...." 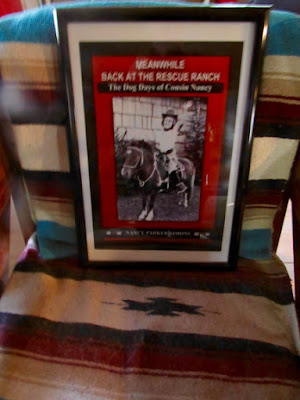 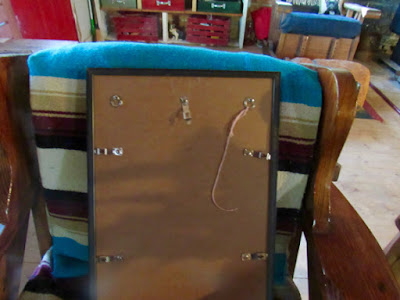 I went to bed about an hour later, after drinking a glass of wine to calm my nerves. And before I turned off the lights I took this picture of our peaceful house with Henry now sleeping in my chair. 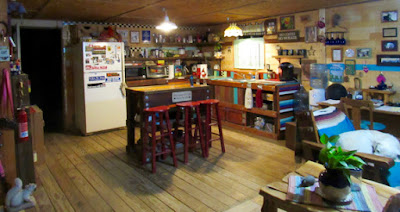 The past few days we have been busy working next door and in our spare hours Tony completed the bar sink plumbing project and I made new curtains for the writing cabin. Here are a few pictures. The first picture are the old curtains. 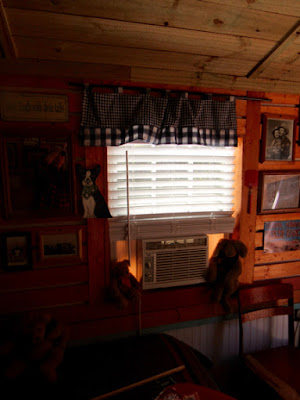 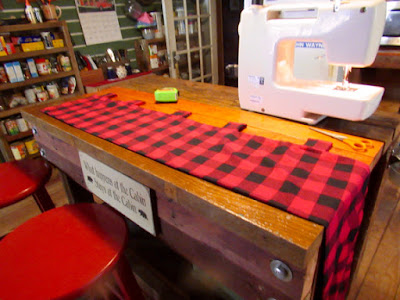 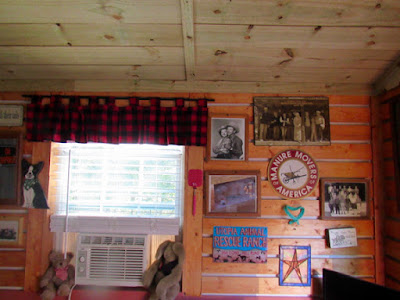 And that is about it for now, because I am going outside to build a small deck, so it will cover and protect the PVC pipe, on the ground, that crosses from the The Cabin over to The Dog House.

Wish me luck and be careful for what you wish for, because you might get a sign like I did that scares the heck out of you and your dog. Even though I am now grateful for getting that sign, because I now know exactly what I need to do, because that certain picture that fell explained it all and it made total sense to me.

Y'all have a great (day) evening and keep on laughing!
Posted by cousin nancy at 11:24 AM

Hi Kris! I totally agree with you that our poltergeist finally has found us and in a way I am glad that it is back. Hopefully the next time it decides to mess with us—Henry will be outside, because that picture falling off of the wall really spooked him.

Hi Anon! I agree with you.

Than y'all for the comments.